Just like Superman, I now have my fortress of solitude! Yep, that’s right the wall is complete! Granted, one wall is a row of block higher than I had expected, but that just gives me that much more privacy. Which is quite lovely considering we had zero privacy to start with. Here’s a little reminder of what the old wall looked like before construction began.

Notice the ugly chain link that was serving as a trellis? That would soon be going away. 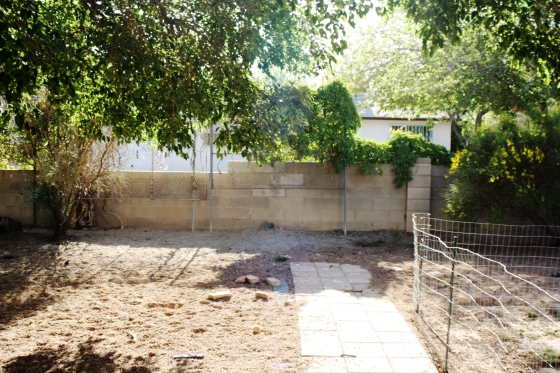 Here you can see loose bricks. 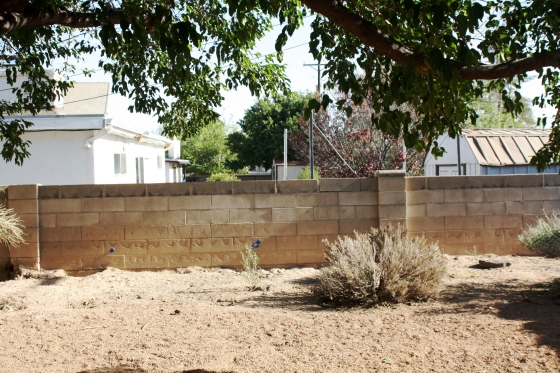 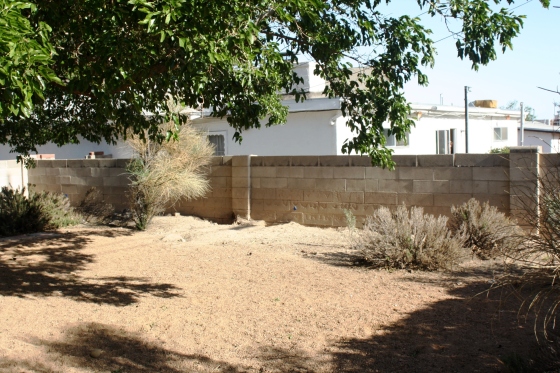 This is my leaning tower of terror. See, how the wall curves slightly? That’s caused from an old tree that had grown right next to the wall, and had been chopped down many years ago. It’s stump had been left, leaving pressure on the old block wall, causing a weakness. But the stump had been there so long, it was pretty much rotted away and came out of the sand pretty easily. 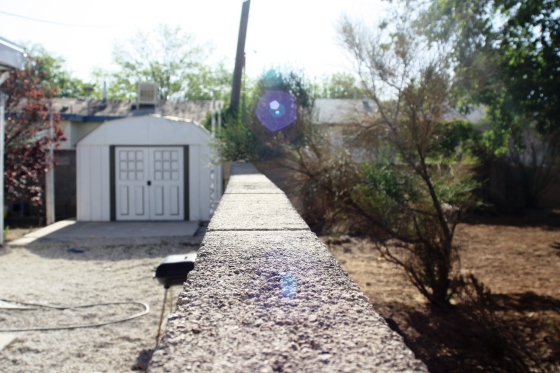 Here you can see how low the wall actually was, we could look all the way down the street into all of our neighbors backyards. In some spots the wall was 3ft high, in others it was 4 ft. The perfect height for neighborhood kids to look over and watch you water your weeds. I’ll miss the kids, they really were sweet. But, I love the privacy! 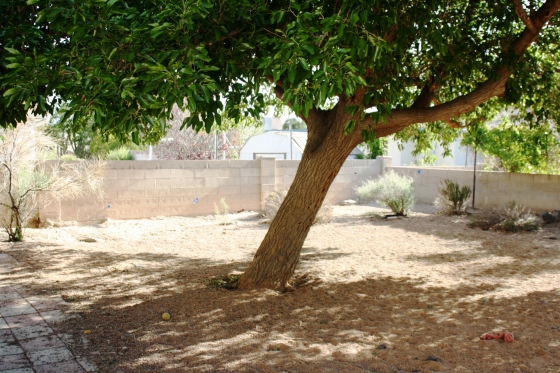 The morning work was to begin, they pulled up, unloaded, and started tearing down the old tittering wall right away. 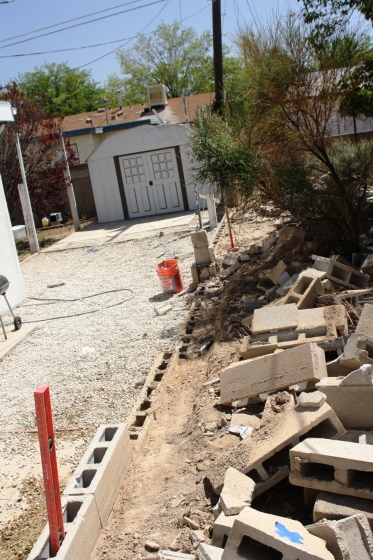 Our old  bricks were so crumbly it didn’t take much to get it demo’ed. 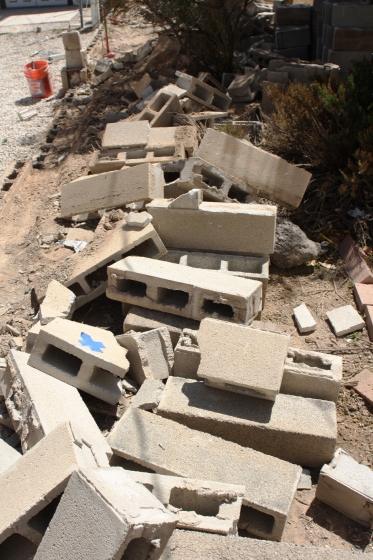 Did I mention the amount of supplies needed to get this job done? This only shows half of the stuff they actually used, since most of it was still on the truck. Dummy me, I didn’t get a shot of the truck with all the brick and toys. 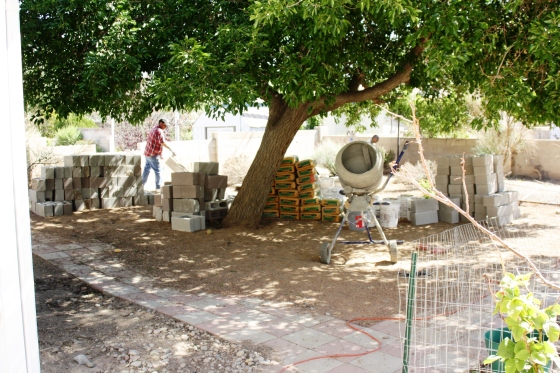 Remember that old chain link trellis? Yeah, I was happy to see that go down. I may or may not have done a happy dance. 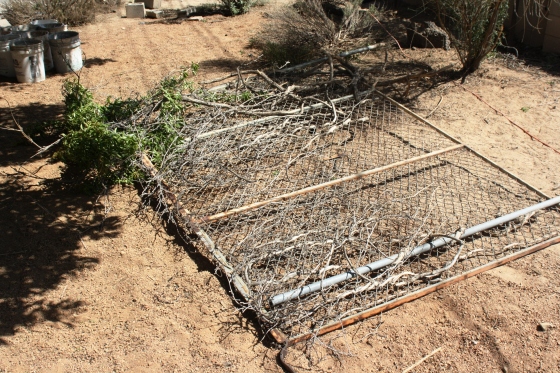 Unfortunately, they weren’t able to get my fortress completed in the two days we had hoped. Apparently, the old bricks they had planned on reusing were too crumbly to be used again. They had to buy more bricks, and put in more reinforcement.

But on the bright side, the dogs liked having new things to sniff over the weekend. 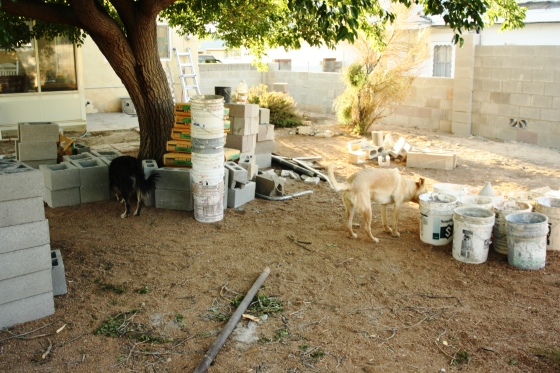 Here’s what the wall looked like after two days of their hard work, and my annoying picture taking. 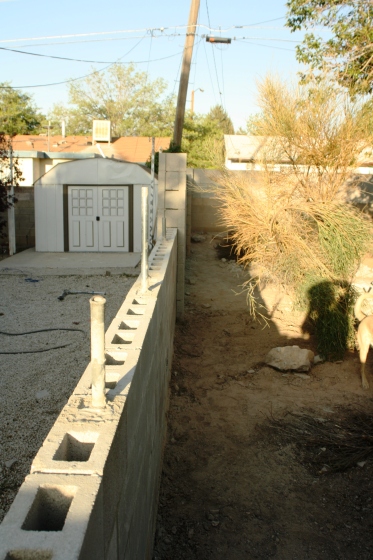 My plants got a trimming too, I hope the poor little things come back. They were already half dead before my yard became a construction zone. 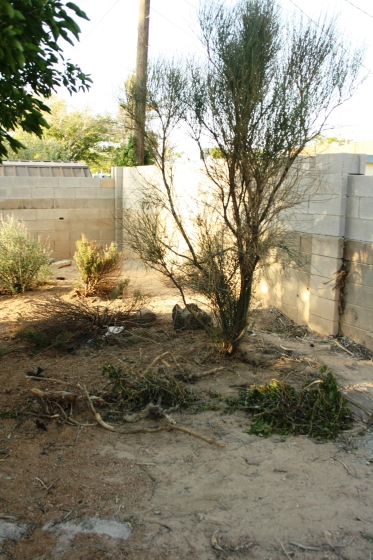 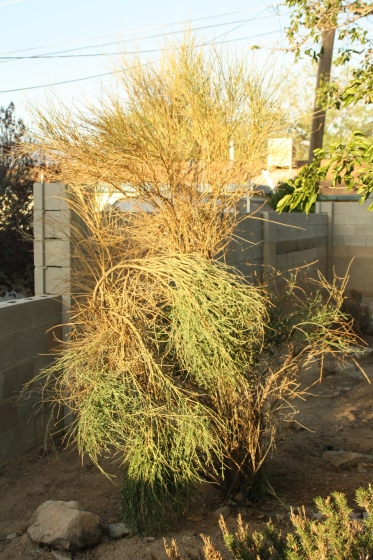 After keeping the dogs away from cement, that apparently smelled too good to resist, Monday finally rolled around. The poor guys worked another full day, but finally, after 5 full days yard-less, and 3 days of a yard full of brick layers, the fortress was complete. 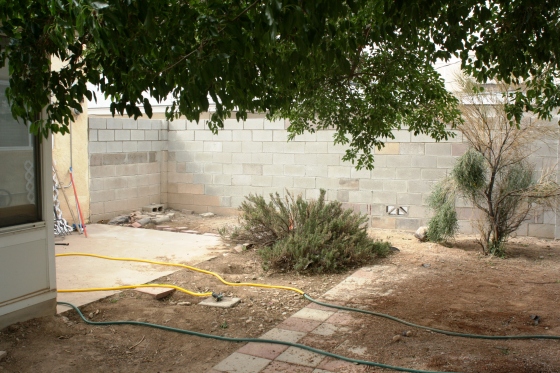 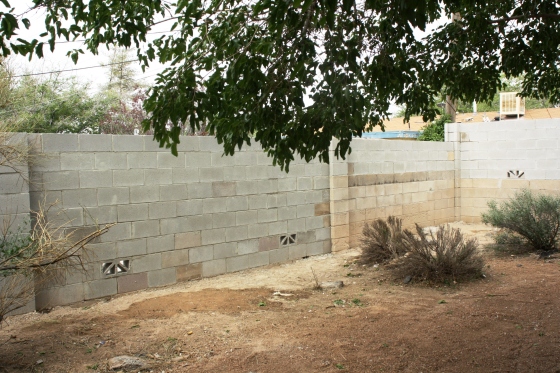 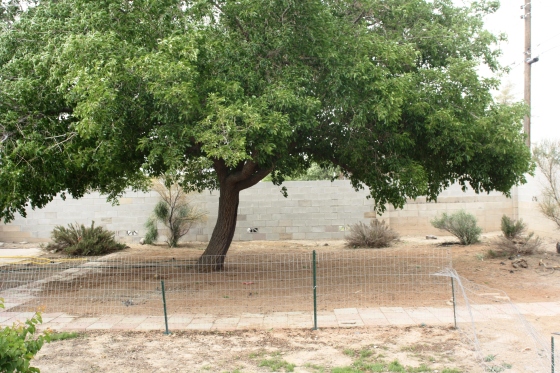 The doggies love their new lookie-loo holes. The neighbors, probably not so much. 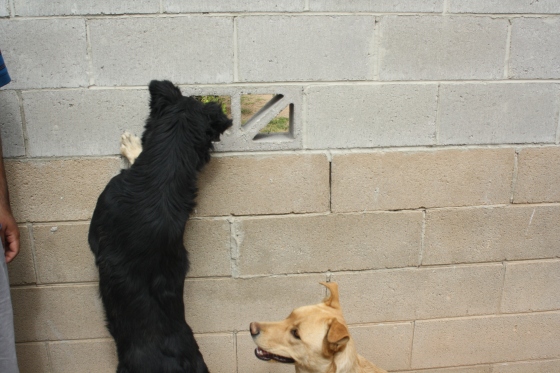 Did you notice the wall seems to have helped with trash being blown in from the street? Well, probably not, since you don’t live here, and don’t see it in person. But believe me, it’s really helped. We’ve had a few windy days since completion, and I’ve had a lot fewer McD’s wrappers tangled within my Rosemary. There was so much trash blown in on these windy New Mexican days, that I just couldn’t keep up with it. I typically pick up trash once a week, when it really needs to be picked up everyday. Apparently the “trashiness” of my yard did not go unnoticed, one of the wall guys politely mentioned that he had hoped all of their trash had been picked up, because they were unsure what trash was already there. Talk about an embarrassing moment. I foresee much yard work in the near future.

Speaking of yard work, last Sunday I went to Wally World with my lovely mother (not the fanciest way to celebrate Mother’s Day, but it suits us), and the good folks over at W-world had all potted plants marked half off! It’s like the little plant fairy’s knew we were coming. And they knew it was a deal my mom and I just couldn’t resist. Certainly a perfect way to celebrate Mother’s Day with my gardening loving momma. 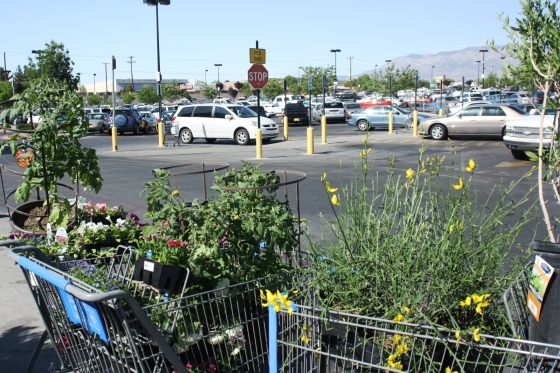 Three shopping carts full of plants later, 1 cart for my dear mother, and 2 for me. I ended up with 3 Spanish Brooms, 4 Snowball Bushes, and one green bush that I can’t remember the name of. Plus, several annuals that will go in pots in the front.

Yeah, we may have gone a little overboard, but boy was it fun.  And yes, I am the crazy lady that brings her fancy camera with her to Wal-Mart. You wouldn’t believe the odd looks I got while taking the photo above.

Well, off my fortress of solitude, to untangle wrappers out of my plants!